Give us your phone number and email
we will send you the details.

Please check your email for the OTP, if not received please refresh the page and try again, also check your spam folders. 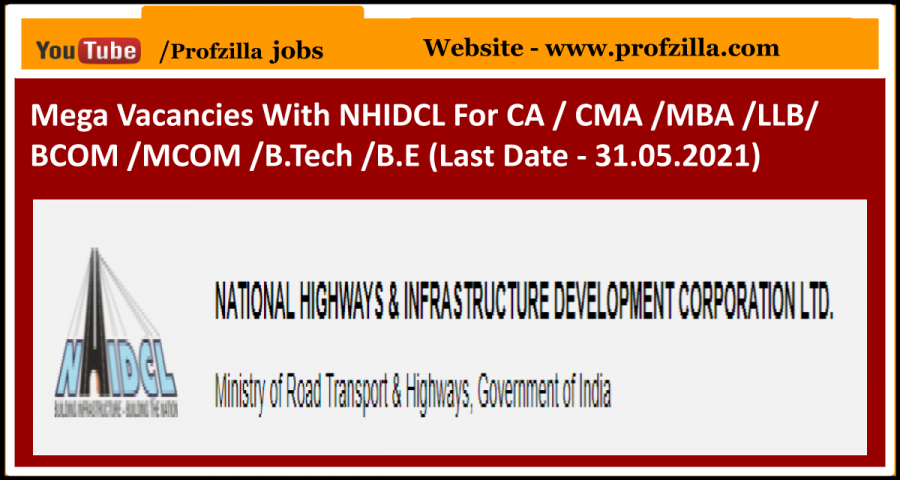 National Highways & Infrastructure Development Corporation Limited has been set up by the Government of India as a Corporation under the Ministry of Road Transport & Highways to fast pace construction/ up-gradation/ widening of National Highways in the North-Eastern Region and areas that share International boundaries with neighbouring countries.

Further, NHIDCL reserves the right to prepare a Panel of selected Candidates for filling up the indicated and future vacancies that may arise in NHIDCL.The number of vacancies in the Posts may vary, depending upon the requirement.

NOTE 1: Officers presently serving in the Central Government Ministries/ Departments, Army, Navy, Airforce, Autonomous Bodies, Public Sector Undertakings, State Government Departments and State Government Public Undertakings and satisfying the prescribed eligibility criteria may also apply for the post on Deputation basis in the prescribed proforma along with copy of ACRs/APARs for last five years, No Objection Certificate (NOC) and Vigilance Clearance (VC). Those applying for appointment on deputation basis can be of any age. Subsequent to their retirement they may be allowed to continue in NHIDCL on contract basis subject to both party agreeing to it. If their parent organization need them to revert back for retirement formalities, they may be allowed to do so for a period up to one week. Thereafter they can continue on contract basis on the terms and conditions applicable to Contract employees.

NOTE 2: Any change or amendment in this Vacancy Circular will be posted on the NHIDCL Website only.

NOTE 3: Incomplete applications or those received after the prescribed date shall be summarily rejected.

(1) The details of Educational Qualifications, Experience required and tenure of the post are given below: -

(2)    The initial tenure of engagement on Contract shall be two years, which can be extended/ curtailed further with the approval of the Competent Authority up to the maximum age limit of 65 years.

(3)    The above Posts can also be filled up by Transfer on Deputation basis of Officers presently serving in the Central Government Ministries/ Departments, Army, Navy, Airforce, Border Roads Organization (GREF), Autonomous Bodies, Public Sector Undertakings, State Government Departments and State Government Public Undertakings and who satisfy the eligibility criteria prescribed above. There shall be no upper age limit for Officers applying for appointment on Deputation basis.

(4) The initial period of Deputation shall be three (03) years, which can be extended for another two years, with the approval of the Competent Authority.

(5) The crucial date for determining the eligibility shall be the closing date for receipt of application.

(6)    The Terms & Conditions and pay / remuneration of the Officer(s) selected for appointment on Deputation / engagement on Contract basis will be governed as per extant Rules of Government of India/ NHIDCL policy, as amended from time to time.

(7)    (i) In case of selection on Contract basis, Officers shall be paid remuneration as per details given below: -

(ii) Remuneration payable to the Officers of Short Service Commission (SSCOs) released from the Armed Forces: -

(a) Pay of the SSCOs shall be initially fixed as per their Last Pay Drawn in the Armed Forces (excluding the Military Service Pay) or pay as per the following table, depending on number of years of service rendered in the Armed Forces and the post at which they are appointed in NHIDCL, whichever is higher: -

(b)    SSCOs who were released prior to 01.01.2016 and whose Last pay drawn statement is as per the 6th CPC, their pay shall be re-fixed by multiplying the total of Last Basic Pay Drawn (excluding MSP) and Grade Pay by a factor of 2.50, rounded off to the next hundred.

(c)    After initial fixation of pay as per sub-para (a) & (b) above, they may be given an Annual increase of 3% of the Pay drawn on 1st of July every year, rounded off to the next hundred, subject to completion of at least 6 months of Contract Service on 1st July.

(d)    All other allowances as applicable to other personnel engaged on Direct Contract basis from time to time shall also be admissible to the SSCOs.

(iii) Special Allowance based on Risk and Hardship would also be payable to all category of personnel viz. Employees on Deputation, Personnel appointed on Direct Contract. This Allowance shall only be payable to personnel posted outside Delhi. Details are as under:-Regional Offices:-

(8)    An Annual increase of 5% of the pay drawn in NHIDCL on 1st July rounded off to next hundred rupees shall be granted to the Officers engaged on Contract basis (other than SSCOs) on completion of at least 6 months of Contract service on 1st July.

(9)    In the case of Serving Officers, their application should be forwarded through proper channel by the parent Office/ Organization, along with the following documents:-

(i)    No Objection Certificate of parent Department / Ministry for the appointment of the applicant to the post applied for.

(ii)    Vigilance Clearance, Integrity Certificate and details of penalties imposed, if any, during the last 10 years on the Officer. This should be duly certified by the Authorised Officer i.e. Head of Office.

(iii)    Certified copies of the ACRs/APARs of the applicant for the last five years.

(10)    In the case of retired Officers who are applying for the post on Contract basis, Pension Payment Orders (PPO) and self-attested copies of ACRs/APARs for the last five years should be enclosed alongwith the Application failing which his/her Application shall not be entertained. For retired Officers from the Armed Forces, ACRs/ APARs shall be sought by NHIDCL from the concerned HQ.

(11)    In case of released/ about to be released SSCOs, who are applying for the post on Contract basis, Last Pay Certificate (LPC) should be enclosed along with the application. ACRs/ APARs shall be sought from the concerned HQ by NHIDCL.

(12)    Applications of the Candidates who were given offer of engagement/appointment on Contract/ Deputation during the last two years but did not join, shall not be considered.

(13)    Applications of those Officers who have left NHIDCL at their own volition since last two years shall not be considered.

(14)    In case the applicant is already working in NHIDCL on Deputation/ Contract basis and otherwise eligible, they will be considered only if they have rendered minimum one year’s service in NHIDCL.

(15)    The candidate(s) selected for the post on Deputation basis shall not be allowed to be repatriated within a period of 02 years from the date of their appointment in NHIDCL.

(16)    Candidates who are willing to be considered for more than 01 post, should submit separate Application for each post.

(17)    Incomplete applications or those received after the last date for submission of application shall be summarily rejected. Those candidates, who had applied earlier for the above mentioned post but were not called for interview, need not apply again.

(18)    If a large number of applications are received, only those candidates who are short listed on the basis of qualifications, experience, tenure and level of service in the relevant field shall be considered for selection.

(19)    The posts carry all India service liability. Therefore, only those who are willing to serve anywhere in India especially in the North Eastern Region, Leh/ Ladakh/J&K, A & N Islands should apply.

(20)    The Advertisement can be withdrawn at any time at the discretion of the Competent Authority without assigning any reasons there for.

(21)    Eligible Candidate(s) who are willing may submit their application(s) in the prescribed Proforma at Annexure “A” through proper channel along with a photograph, addressed to Director (A&F), National Highways & Infrastructure Development Corporation Limited, 3rd Floor, PTI Building, 4-Parliament Street, New Delhi - 110001 latest by 31.05.2021 (Monday) up to 18.00 hrs.